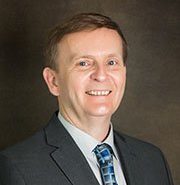 Bill earned his Bachelor’s degree in physics at Worcester Polytechnic Institute in 1979, and completed his master’s degree in optics from the University of Rochester in 1982. Before attending law school, Bill was a member of the technical staff at the MIT Lincoln Laboratory in the Optical Communications Technology, Laser Radar Measurements, and Optical systems Engineering Groups. In addition, Bill served in an engineering staff position in the Optical Group of the Perkin-Elmer Corporation.

In 2013, Guerin and Rodriguez LLP joined forces with Schmeiser, Olsen & Watts LLP, where Bill is a partner at our Marlborough, Massachusetts office. Bill is admitted to practice in Massachusetts and the United States District Courts, District of Massachusetts.

Check back soon for new publications